Retro City Rampage has been in development for a nearly a decade, but now it is finally here! Back in 2002, Brian Provinciano originally set out to produce a Nintendo Entertainment System homebrew game, a remake of the original Grand Theft Auto. It was originally entitled Grand Theftendo, but once he had developed software to get around the limitations of the NES he moved the game to PC. At some stage during development the game morphed into its own title, rather than a remake, and the idea to fill it with references to many of the games and movies that Provinciano had grown up was born.

It would be an understatement to say that this game has been eagerly awaited. Once screenshots and video clips of the game started surfacing online, the retro community went ballistic, and the barrage of 'when is this coming out?' messages on forums started.

Well it is finally here, on PSN and PC, with XBLA and wiiware versions to follow shortly. I have been very excited about the release game since I heard of it a couple of years ago and, while I was wanting the XBLA version, I wanted to get my hands on the game straight away, so bought the PC version.

After booting up the game I was initially very impressed with the NES look of the game. Even more so when I went to the settings and found the many different display options available. You can make the game look like any retro console or computer you can think of, from the ZX Spectrum and Commodore 64, to the Gameboy or even PC CGA display. Unfortunately my enthusiasm was dampened somewhat once the game actually started. After the initial nostalgic joy of seeing a new game that harks back to the 8-bit visual style, you suddenly realise everything is absolutely tiny. The sprites are minuscule, smaller than Lemmings or the Cannon Fodder soldiers. We are talking magnifying glasses territory here. This seems a strange choice as the NES, C64, Atari and other consoles of this era had big chunky graphics. When entering buildings things become worse still, with the game display the size of a postage stamp it is hard to see what's what. Sometimes I had to focus for a second or two just to find where my character was among the tiny box and furniture sprites.

For the sound track Pavinciano brought in 3 renowned Chiptune composers; Leonard "FreakyDNA" Paul, Jake "Vert" Kaufman and Matt "Norrin Radd" Creamer. They have done a bang up job too, with catchy ditties playing throughout your adventures. The track clearly inspired by the music to Paperboy was an early highlight. Parody Fatigue. Not something you may be familiar with now, but after spending an hour rushing around the streets of Theftopolis, you will start to feel the effects. Retro City Rampage simply bombards you with references to other materials, movies, games, people, places. So much so, you feel like you are watching 5 or 6 TV channels at the same time.
I found the constant stop-start gameplay style quite off-putting. Stages seem to be split into small sections, with constant cut scenes and yet more references. The problem is the references aren't funny. One bad guy, clearly copied from Sonic the Hedgehog's long-standing nemesis is called Doctor Von Buttnik. This is the kind of unfunny humour that prevails throughout the game, and it becomes tiresome fast. In fact almost every single building, object, character or stage has a reference, sometimes more than one, to another game or a movie.
It becomes too much after a while. There are no fresh ideas on display here anywhere, and while there are moments of creativity in the way you tackle a level, everything here feels like a poor man's version of the material that inspired it. The whole game looks, sounds, and plays like a slightly more polished free browser game. Not unlike one of those awful Scary Movie parody flicks the whole thing is a collection of small skits thrown together to make a whole. Unfortunately it just gets boring quite quickly, and when the gags aren't even funny, it becomes tedious to sit through. 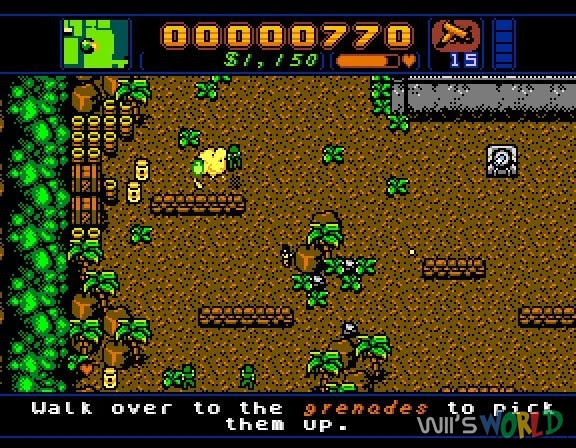 I was really looking forward to Retro City Rampage, it was genuinely one of the top 3 games of 2012 that I was looking forward to. Unfortunately it has been a massive disappointment. I figured I was the target audience for this game, after all I love 8-bit gaming, collect and play NES games, enjoy humour in games, and I get every reference in the game due to being an 80's kid. Yet the whole package left me deeply unsatisfied. The game tries too hard to cram as many jokes in as short a time as possible, but it backfires and shows the game up for what it essentially is, a mildly amusing browser game to spend 20 minutes on before moving on to something deeper, and better..

There are some fantastic mini games featuring Super Meat Boy and Commander Video (from Bit.Trip Runner) that are actually more fun to play than the core game itself. The Bit.Trip Runner game in particular being excellent and is almost worth the price of admission alone.

However the top down GTA style gameplay gets very dull, very quickly, and not even the odd 2D platforming or twin stick shooter section can save it.

It has pained me to write such a scathing review of a game I awaited with such eagerness. I just found Retro City Rampage to be too in-your-face to spend any more time with than necessary. There are moments of joy to be had of course. Running pedestrians over is great fun, some of the missions are enjoyable, and many of the references will bring a smile to your face (Metal Gear Solid's Snake spoof saying “Sorry, I Feel Asleep” made me chuckle), but overall it's all so throwaway, you never feel any attachment, or commitment to playing it for very long.

You are much better off getting your NES fix from the excellent, and free, PC game Abobo's Big Adventure, which is far more humorous and true to its reference material than Retro City Rampage, and is over in 40 minutes or so, so doesn't outstay it's welcome.

I will still be checking out the XBLA title upon its release to bring you a review of that. Who knows, maybe playing it on a bigger screen will enable me to actually see what the hell is going on.

If this game brings more fans to the retro and indie gaming community then that's great. I am sure people will shout this game's praises until their throats are hoarse. I'm sad to say I won't be joining them. Sure, this is throwaway fun with some mild chuckles and nostalgia thrown in, but it's a fairly charmless and shallow experience that offers no original ideas, won't hold your attention for very long, and tries far too hard to be hip and cool with its onslaught of references.