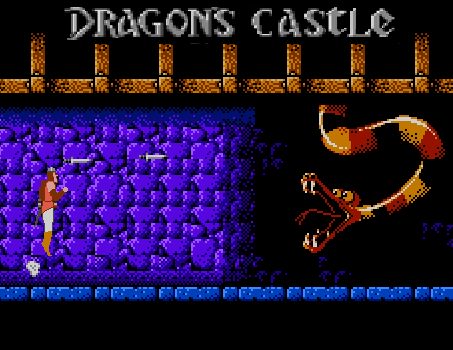 For anyone unfortunately enough to have played the Nintendo NES version of Dragon's Lair, here is a chance to finally put those demons to rest.

Dragon's Castle is a fan made re-imagining of the infamous 8-bit home conversion. The NES game has to be one of the worst ports of an arcade game ever created. Granted, they were never going to replicate the amazing Don Bluth animations of the coin-op original. But did they have to come up with something so downright evil as the sidescrolling nightmare that gamers were subjected to? I can only assume the programmers were minions of the dark lord, as I cannot fathom any other reason as to why they would release such a badly designed, hideously difficult game onto the gaming public. I don't think anyone even managed to get past the second screen, making it a real kick in the teeth for poor kids who bought it back in the early 1990's. The Angry Video Game Nerd did an excellent video on it, so click here to view it and see the nightmare for yourself. 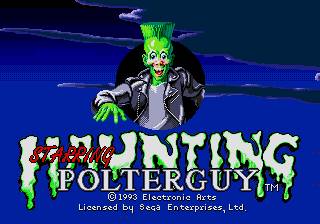 I am certain that being dead sucks, although we cannot really ask any deceased individuals to verify this. You could always speak to a medium, but as anyone with a working brain knows, these people are human parasites that manipulate grieving relatives for financial reward, so best to ignore them completely. The classic 1980's Tim Burton movie, Beetlejuice showed a recently expired couple wreaking havoc on a nasty family who had moved into their dream home, and their antics looked surprising enjoyable. So maybe the afterlife isn't all bad. Electronic Arts certainly thought so, as their 1993 Sega Mega Drive game, Haunting (featuring Polterguy) completely nicks the plot from that movie, switching the dead newly-weds for a teenage skate punk. 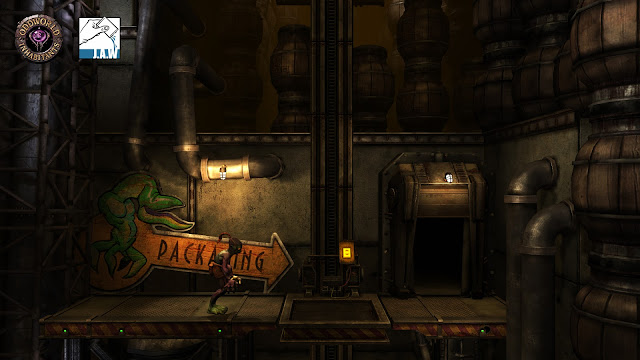 Exciting news for fans of the original 1997 PSOne title, Oddworld : Abe's Odyssey. It is getting a spanking new HD remake, and is scheduled for release later this year.

The original game was a unique adventure that combined 2D platforming, with stealth and puzzles to great effect. Coupled with a great atmosphere and setting, not to mention the excellent characters, it was a well deserved hit. The game put you in the role of Abe, a hapless alien who is part of the Mudokon race, who are forced to work as slaves at the RuptureFarms meat processing factory on Oddworld. Not only that, but he soon discovers that his fellow Mudokons are to be the main ingredient for a new food product. Naturally, he wants no part of this, and sets out to free his brethren.

For all you SEGA and retro game fans out there. There is a huge sale on Xbox Live Arcade with discounts of up to 67% off.

If there are titles you haven't picked up already then I suggest you rush on over to the Xbox Marketplace and get your spend on!

There's also NiGHTS for only 400, The Cave for 600, and Renegade Ops for 320. Plus, loads of Sonic games going cheap. So grab a bargain (or several) while you can. 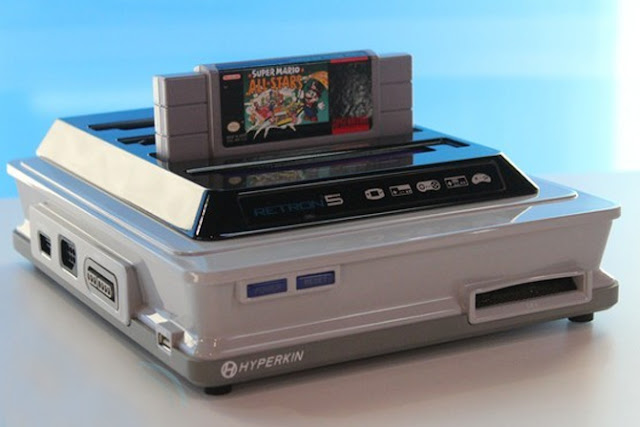 I am sure most of you are aware of these strange retro consoles that keep appearing year after year. Ugly, cheap looking machines with crappy controllers, and emulation that is usually mediocre at best. I have played on several of these machines over the years and I have to say that they are universally awful. I can only assume they are aimed at the very casual retro gamers who won't notice sound issues, graphical abnormalities or other failings that separate these emulator based machines from their genuine counterparts. 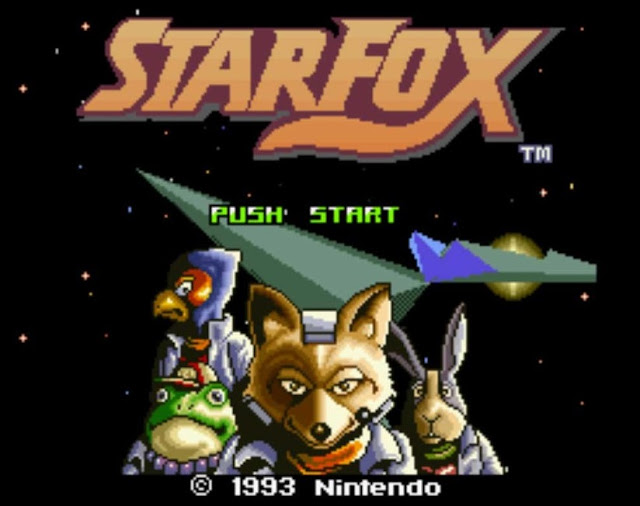 As Starfox is celebrating its 20th anniversary this year, I thought it was high time I went back to this classic title and give it the thorough playthrough it deserves.

I am now writing this mere moments after launching my last remaining smart bomb deep into Andross' smug face and putting an end to his reign of terror once and for all. Destroying Andross, and beating Starfox, is something I have shamefully failed to do in the 20 years since I first set eyes on its mind-blowing faux-3D worlds. But after releasing my sweaty grip from the controller and watching the end credits, I can finally tick another classic SNES game off of my 'To-beat' list. A list that has recently seen Super Castlevania 4, Zelda : A Link To The Past, Pilotwings, and now Starfox struck off it. 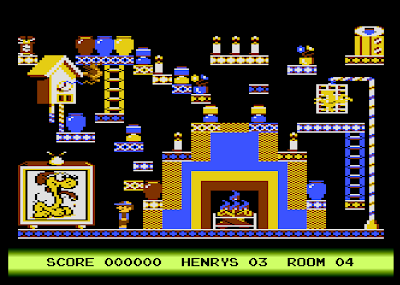 Honey, I Shrunk The Kid

Being tiny must be difficult for anyone, but especially for the Prince's son. For Henry, heir to the throne (at some point down the line) has foolishly being drinking strange potions found in the palace laboratory and now finds himself a mere 6 inches tall. There is a lesson to be learnt here kids! So, Henry sets off to find the antidote - which would surely be kept with the shrinking potion itself, but that is just nitpicking. We all know that story-lines are utterly irrelevant for any 8-bit platform game involves jumping over teapots, kettles and the the like.

There is nothing worse than running out of milk. We have all been there. First thing in the morning, you stagger into the kitchen and sleepily pour yourself a bowl of cereal and put the kettle on, only to discover moments later that you have run out of milk. Disaster! I guess there is always the option of a cereal bar or black coffee though. Poor old cats don't have that luxury. So imagine their abject horror upon discovering that the entire world supply of milk has been depleted – vanished – gone! It makes one wonder what happened to all the cows – or even goats (yuk!) - but this is never explained. Anyway, never ones to sit around doing nothing (er.. actually) the cats set off to locate a new source. As it turns out, naturally forming full fat milk is produced under the ocean floor – handy - so the felines turn to subaquatic mining to gather the goods. 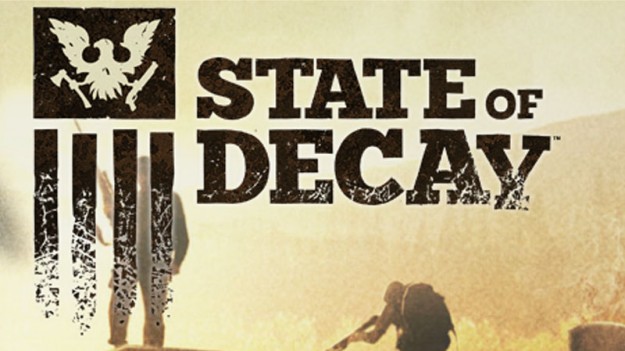 Zombies are everywhere, and I am not talking about walking our streets in search of brains. I am speaking of the colossal popularity of the undead in modern entertainment. With a plethora of recent zombie games on consoles (Naughty Dog's The Last of Us, and Techland's Dead Island Riptide), MMOs on PC (Dayz and War Z) and a big budget movie in cinemas (World War Z), it would seem that shuffling cadavers on the hunt for human flesh are inescapable.

As a fan of post-apocalyptic scenarios, I have been eagerly awaiting this new open world action RPG from Undead Labs. The chance to explore a sandbox environment, sneaking down ruined city streets, looting chests and shelves for vital supplies, dealing with other human survivors and, of course, caving in the heads of those pesky flesh eaters, is an exciting prospect. Dead Island has been the closest I have come to achieving these survivalist fantasies so far, but now State of Decay takes the crown. It is, without a doubt, the most satisfying survival zombie experience ever created. But it is not without its flaws.

The Legend of Zelda - A Link Between Worlds (3DS) - Video Trailer 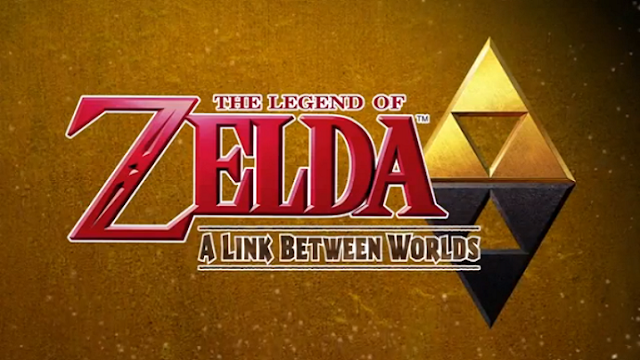 News that a sequel to the Super Nintendo uber-classic, The Legend of Zelda : A Link To The Past, hit the interweb recently, and got everyone excited! The SNES game is one of the greatest games of all time and one I come back to time and time again thanks to it glorious 16-bit visuals, epic soundtrack, and exceptionally polished and fun gameplay. In my opinion, it has never been bettered by any further adventures of Link (and yes, I have played Ocarina of Time before you ask). The Minish Cap on GBA was an excellent adventure, as was Wind Waker on the Gamecube, but other than that, none have managed to grip me like the 3rd game in the series. But that could all change now, with the upcoming release of a 3DS exclusive sequel - now officially entitled A Link Between Worlds.
Read more »
No comments:

Email ThisBlogThis!Share to TwitterShare to FacebookShare to Pinterest
Labels: 3ds, legend of zelda, link, link between worlds, link to the past, nintendo, SNES, Zelda 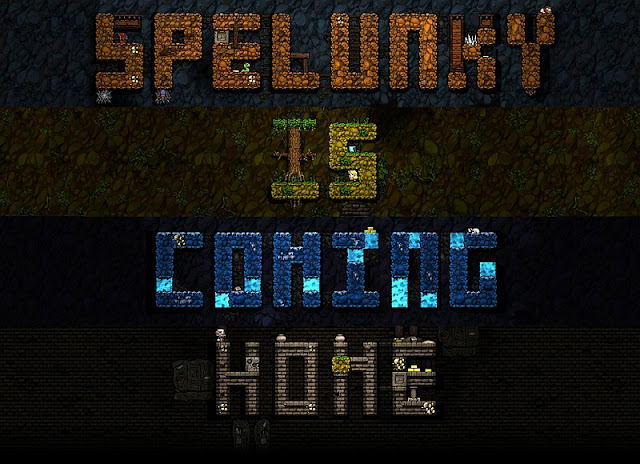 OK, OK. Settle down. I know you are excited. I am too!

As you have guessed by the title of this thread, Spelunky is coming home to the PC. As anyone who has played the enhanced XBLA version will know, this is a very good thing indeed. Originally starting life in 2008 as a freeware PC title, Spelunky soon gained huge popularity due to its wonderful pixel graphics, solid platforming action, addictive gameplay and maddening difficulty. It managed to perfectly combine a fantastic 2D platformer with elements of the Roguelike genre. Permadeath, randomly generated levels and items, and no saves or continues made Spelunky a hardcore title. But hardcore titles always gain the biggest cult followings, and the one man behind the genius, Derreck Yu, revealed that an Xbox Live Arcade version was in the works. 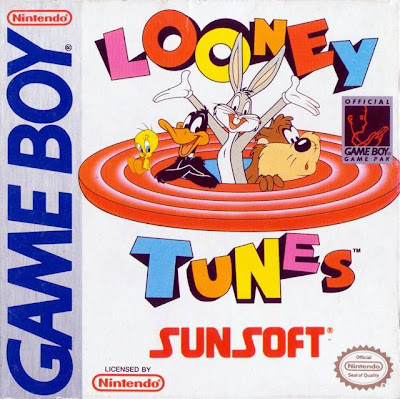 So close, yet so far

Close, but no cigar. This is a phrase that perfectly encapsulates the greatness that Looney Tunes on the Nintendo Gameboy almost achieves.
First impressions are very good. The graphics are of a high standard, with large, clear sprites and detailed backgrounds, as well as some smooth, high speed scrolling. The music is catchy and jaunty as any good cartoon platformer soundtrack should be, and for the first few levels you will be impressed with the responsive controls and fun gameplay. Then you reach stage 5 and it all comes crumbling down. 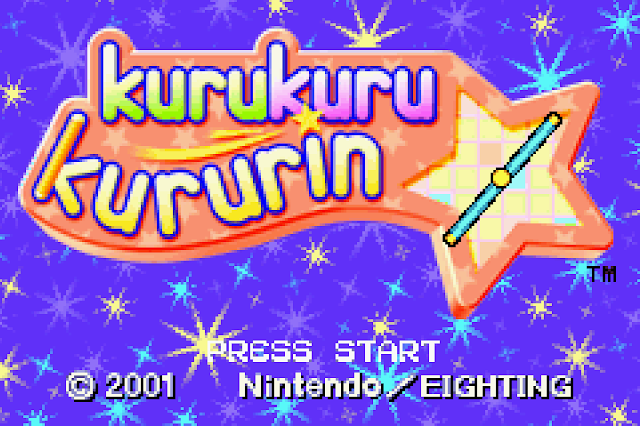 You spin me right round

I must admit, I am having an absolute ball with casual games these days. Whether on my Android phone, or via the excellent emulation on offer on the PSP, I have been blissfully immersing myself in quick fire games that are easy to pick up and and play, yet extremely hard to put down. Old school arcade games and action puzzlers are my current genres of choice, and I have been loving such addictive titles as Amazing Penguin (Game Boy), Klax and Doki Doki Penguin Land (Mega Drive), Cameltry (Arcade), and now Kuru Kuru Kururin on the Gameboy Advance. 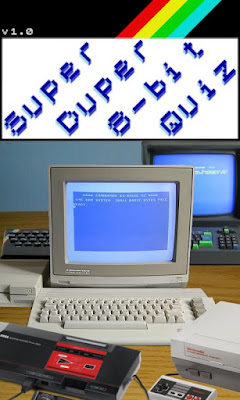 Put your 8-bit knowledge to the ultimate test!

Here's something a little different from my usual coverage of retro and indie games. A quiz App for your Android mobile phone!

I recently re-acquired an HTC Desire via Ebay, after losing mine on holiday (on the first day no less). As I had spent hard earned money on it - as opposed to getting it free with a phone contract - I felt I would look on the Google Market and see if there was anything worth playing. During my search I found multiple quiz 'games' relating to retro gaming, so hastily downloaded them in order to put my knowledge to the test. While the majority of these quiz Apps are multiple choice questions - making them pretty easy for anyone with a basic knowledge of retro games - one of them goes hardcore and requires you to type in the exact name of the game shown. It is called, simply, 8-bit Quiz and is developed by SuperDuperQuizzeses. 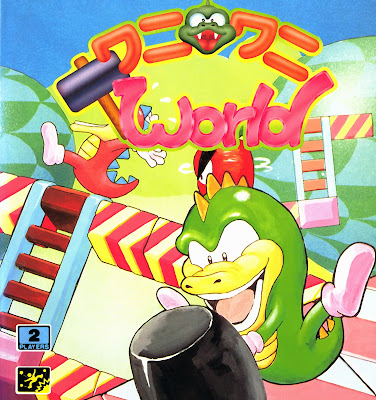 Apart from the wonderful Bubble Bobble, single screen platformers have never really been my thing - I have always preferred my 2D running and jumping antics to be of the scrolling variety. Bubble Bobble is one of the first arcade games I ever played, so will be forever etched into my memories as a stone cold classic. The imitators that followed, namely titles such as; Parasol Stars, Snow Bros, Rodland, Don Doko Don, Joe & Mac Returns, Tumble Pop and even the ludicrous Super Methane Bros didn't really do anything for me as they failed to improve on the bubble blowing dragons' adventures. But occasionally one will come along that I really enjoy, Penguin Brothers, an arcade game from 2000 was one, and Wani Wani World on the Mega Drive is another.