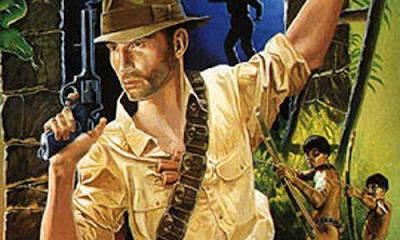 And you thought Spelunky was hard!

Lets get one thing straight before we begin, Core Design hate you. I mean they actually despise your core being, existing only to make your life as miserable as possible. This may not be true, of course, but I can think of no other reason as to why Rick Dangerous, and its snappily titled sequel Rick Dangerous 2, goes out of its way to punish you so relentlessly, over and over again. 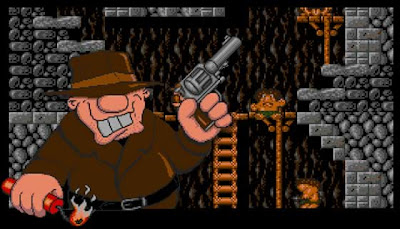 Released in 1989, Rick Dangerous is a 2D platformer starring an Indiana Jones inspired hero, complete with the instantly recognisable hat who must travel through 4 large stages set in a cavernous temple full of treasures, an Egyptian temple, a castle, and the final military base. The game begins with our hero crash landing his plane in the jungle and, upon entering the caves is immediately chased by a huge boulder. The objective is simply to reach the end of each level, collecting optional treasures along the way, and avoiding the pissed off natives. Sounds simple doesn't it? Well it would be if not for one important factor, traps. Traps, traps, traps.. they are everywhere and will be the source of your demise more times than you have blinked. Bah! I hear you cry, I can handle traps, I've completed Splunky for God's sake. Pipe down you, these are no ordinary traps. These are the worst kind of traps, ones that spring out of nowhere, with no indication or tiny give-away to their whereabouts. Spikes come out of the floor, out of the walls, pop out from under collectable treasures. Arrows and darts fire from the walls as soon as you touch a certain part of the screen, and platforms fall on to your head with no warning. It is a game that relies on replaying and memorising the locations of these traps as much as fast platforming skills. You don't even have infinite lives to toy with, a la Super Meat Boy. This is old school territory, you run out of lives and it is game over, no continues, no saves, just a big fuck you before throwing you back to the title screen. To say this game is hard is like saying the North Pole is a bit chilly.


But despite the ludicrous difficulty and unfair elements to the game, it still manages to keep you coming back for more. The graphics play a small part in this, being clear and attractive in a basic kind of way. The stages contain enough charm and atmosphere to keep you hooked, and wanting to explore the rest of the level. The items at your disposal are fun to use too, a gun for shooting the tribal folk, and dynamite for blowing up rocks and obstructing walls and, randomly, a stick for .. er.. prodding things I guess. The levels are also well designed, despite the fact they are laden with so many ways of killing you that you will lose count. I have been playing Rick Dangerous on and off since its arrival in 1989 and have never gotten past level 2. 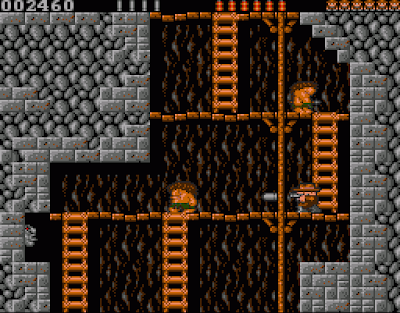 I have always preferred the Amiga version, but there were decent ports available on all the main computers at the time, the Commodore 64, Spectrum, Amstrad CPC, and Atari ST. The sequel, released a year later, stuck to the same formula, only this time is set in the future. This means the game takes on a vaguely camp Flash Gorden, and Buck Rogers style aesthetic, with laser guns and robots replacing the savages and snakes. It also added the ability to slide bombs along the floor, which lead to some light puzzling elements. It's a great entry to the series and is also bastard hard, with the same instant death surprises potentially waiting around every corner. It's a shame there was never a third entry, but Core Design went on to create a certain Tomb based game starring a woman named Lara Croft. Rumours have it that that started life as a proposed Rick Dangerous game before becoming the Tomb Raider we all know today. 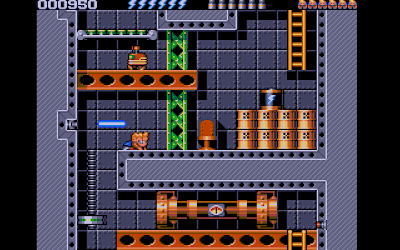 Rick Dangerous's popularity has seen it ported to many homebrew enabled devices, such as PSP and the Nintendo DS. Both are very good, the DS version being the best handheld iteration. My favourite version however is the wonderful remake available to those of you with a homebrew channel enabled Wii. Released in 2008, it was a complete remake of the first Rick Dangerous game, with a lovingly created graphical overhaul, giving it a new lease of life for long time fans like myself, as well as enough visual clout to appeal to gamers accustomed to the graphical standards of Wii and Wiiware games. 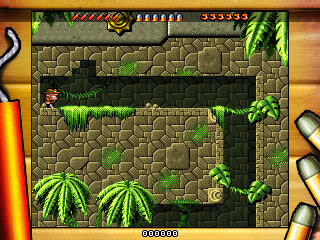 
The graphics are gorgeous, and the stages now ooze atmosphere and charm,. From the first underground temple stage to the enemy lair, they all look wonderful, with a high level of polish. There is new music, though it still takes a back seat to the sound effects and works all the better for it. There are also new cut scenes at the beginning and end of the game (not that you will ever see the final one), and the screen aspect ratio keeps it old school, giving you graphical borders much like those seen on modern XBLA remakes of old titles. 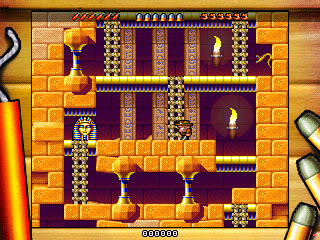 Overall it is excellent, and is a textbook example of how a remake should be done. Handled with care and attention, it keeps the core formula the same but with a beautiful new lick of paint. Rick Dangerous is as playable, and as maddeningly difficult as ever, and as such I love it all the more. We live in an age where brand new retro styled platformers are designed to be as difficult as possible. Games such as Super Meat Boy and Spelunky have proven that many gamers enjoy games that offer a stiff, often unfair, challenge. Rick Dangerous was a pioneer in hardcore platformers, and it may find a new audience with those who never experienced it first time around. 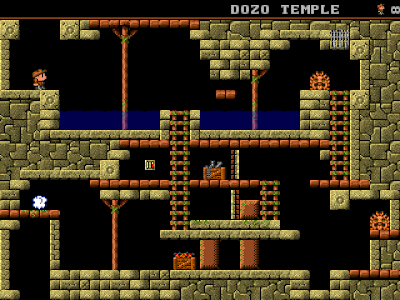 An unofficial sequel of sorts made its way onto the net in 2008. Developed by Scorpion Software, Lao's Quest takes the familiar template of the original Rick Dangerous and adds more puzzles and depth to proceedings. The bomb sliding mechanic from Rick Dangerous 2 is still here, as are the instant death traps. However, there are added gameplay elements such as keys that open locked doors, and movable blocks that can be pushed to make steps or block arrows.
It is very difficult, as it should be, but is immensely satisfying when you make it to the next screen. You have limited lives, but can continue as often as you want from the screen you died on which helps matters. There are also achievements to obtain by completing levels quickly, killing all the enemies, and finding all the bonuses. It is a great game, tough as nails, and highly addictive.

There is also a Christmas edition of Rick Dangerous available as a downloadable ROM for the Gameboy Advance. Featuring festive backgrounds full of snowmen and presents, Rick even dons a Santa hat for the duration. I will be covering this seasonal treat in more detail in my forthcoming Christmas games write up. 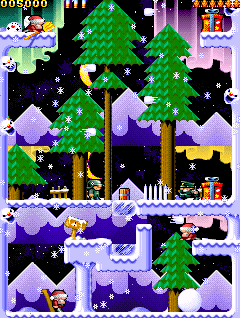 
In the meantime, download Rick Dangerous on your platform of choice and prepare to die, many many times. Just don't blame me when you become addicted to it. 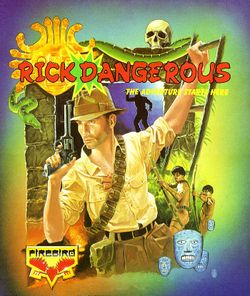