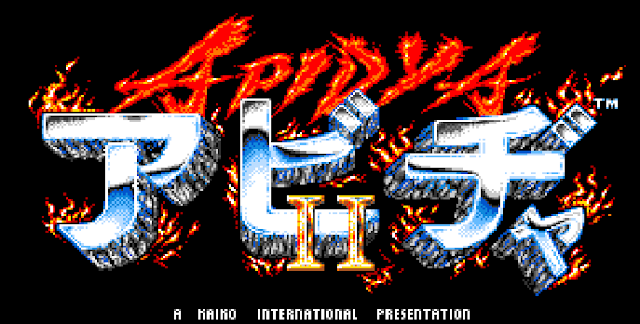 When it comes to shoot-em-up (or 'shmups' to use the correct parlance) I have always teetered on the brink of becoming a hardcore fan, having spent a brief period thoroughly addicted to Cave's wonderful games. But, like junk food and pop music, the novelty soon wears off and I end up ditching it for something with more depth. However, after many years of playing shmups I can definitely say that the games that hold my interest for more than a few plays are those that have interesting environments to traverse; the beaches of war torn Europe; a city under alien invasion; a forest base or the depths of the ocean. 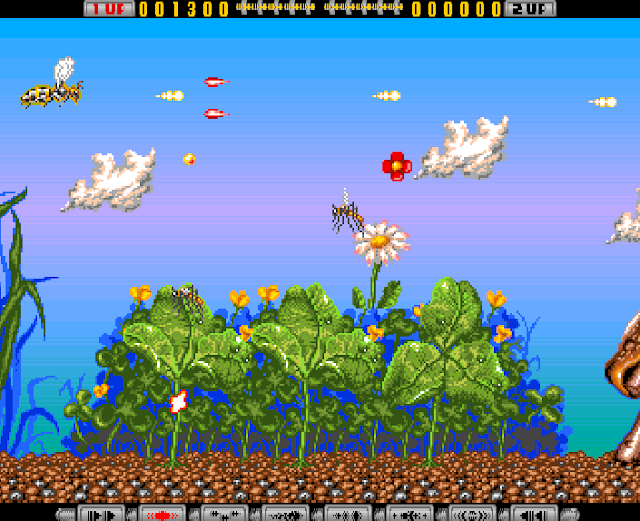 Anything is preferable to the tedious vacuum of space! Yep, if there's one thing I find more boring than watching paint dry it's flying a generic spaceship or shit anime robot through a black screen filled with stars and asteroids. Give me Capcom's 1943 franchise, the sublime Raiden series, or DoDonPachi instead. Hell, even the madness of Konami's insane Sexy Parodius is preferable. But there's another option, a fantastic and (shock horror) original horizontal blaster that never features in the shmup's native home of the smokey arcades of the 1980s and 90s. Nope, this particular gem is a Commodore Amiga exclusive, the quirky and wonderful Apidya. 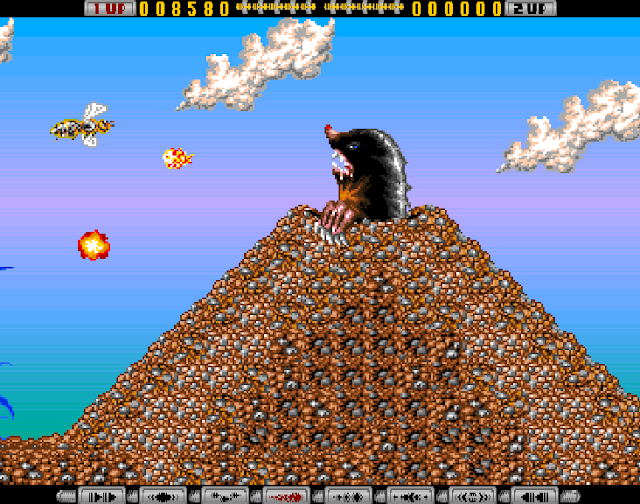 Apidya takes the standard horizontal shmup formula of moving a ship around while blasting incoming enemies, both in the air and on the ground, and gives it an identity all of its own by switching the space and war themes found in a million other shooters to something closer to home - your back garden. So, gone are planes, ships, tanks, robots, aliens and what-have-you, and instead we have an array of insects to do battle with.. oh yes, and you play as a wasp. How cool is that!? We all know wasps are right bastards, capable of giving you a nasty sting, but in Apidya the bastard can shoot fiery death at his enemies, something that would definitely spoil your picnic. As you fly through the picturesque gardens you will face beetles (of both stag and dung variety), bees, butterflies, snails, hornets and many more.. even moles have taken umbrage at your existence and will pop up to hurl rocks at you. It's incredibly refreshing to play a shooter in such a different setting to the norm and, even better, it's fantastically playable to boot! 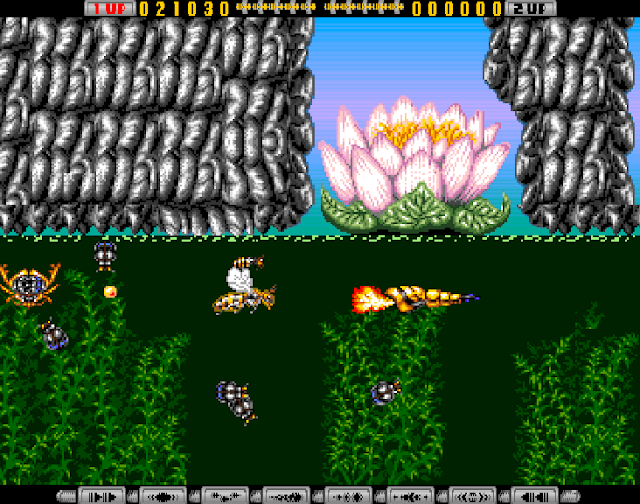 Presentation throughout is top notch, with some truly gorgeous 16-bit representations of the outdoor areas you traverse, from the standard plants and grass of the garden to the more water based pond stages, everything looks amazing – I would say it's one of my personal favourite Amiga games on visuals alone. Add to this a truly kickass soundtrack by Chris Hülsbeck that will stick in your head forever, and you have an extremely polished package. The bizarre and totally unfitting anime intro animation (as well as other nods to the story and characters behind the action) are rather jarring, however, feeling completely at odds with the in-game setting. As does the mind bogglingly strange bonus stage, that occurs after each boss, in which you navigate your wasp along a sunset strewn backdrop, collecting naked babies (Cupids?) while avoiding naked red devils. Seriously... WTF? 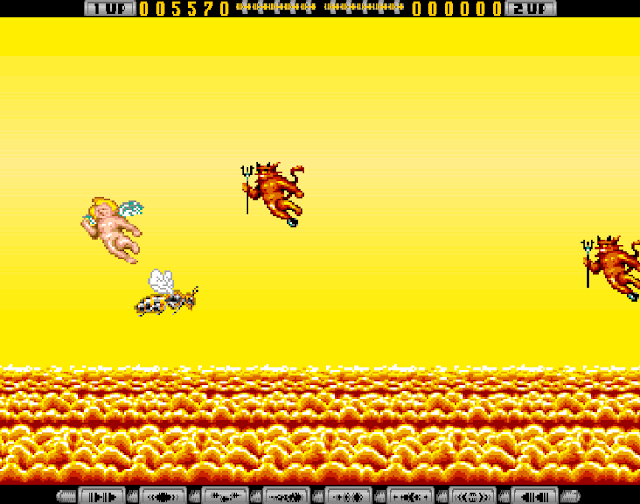 Gameplay is of an incredibly high standard, with fast and responsive controls keeping you in full control of your killer wasp - though make sure you have a 'proper' joystick like the Zipstik or Competition Pro (standard advice when gaming on the Amiga)! The power-up mechanic is very similar to the one seen in Konami's excellent Gradius / Parodius series, with a system that allows you to use your upgrades - flowers you collect from vanquished foes - on the weapon or ship ability of your choice with a tap of the space bar. This allows you to focus on increasing your wasp's speed, or maybe boosting the power of his horizontal or ground firing weapon. This adds an element of strategy to play, as well as the risk / reward factor of resisting the urge to immediately use power-ups in order to 'save up' for a bigger enhancement. 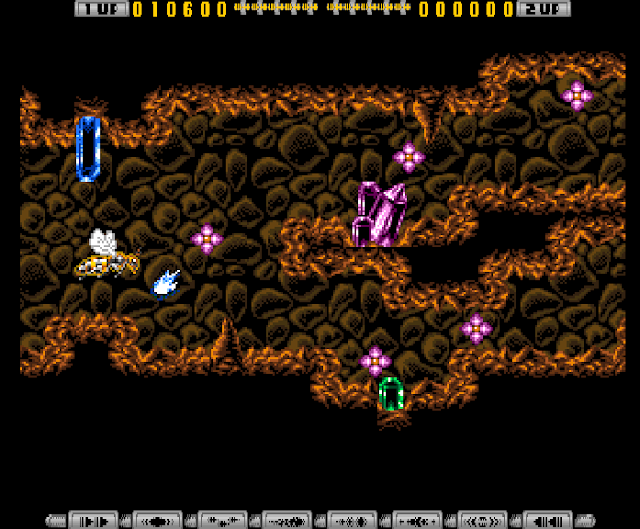 The only problem I have with Apidya is its difficulty. This is one hard game! I am fairly proficient at shmups, but even getting off the first world (made up of three stages and a boss) is a pretty mammoth task. Not only does the game ramp up the number of enemies on screen after only the first stage, but death stops play and restarts you a reasonable way back – meaning you have to repeat the same stretch of terrain again, only with less power-ups. World two's pond setting is an absolute nightmare, with unpredictable enemies flying everywhere and larger static enemies that soak up a huge number of bullets before dying. It's a real shame as, although satisfying and challenging, Apidya goes overboard, making it rather frustrating – made more so as you so desperately want to progress to see the next world and hear the next tune. Still, despite this brutal difficulty, Apidya is my favourite shmup on the Amiga – infinitely better than the dull and hugely overrated Project-X and Xenon 2, and the graphically impressive but boring and empty Agony. So, if you think you are up to the task, then fire up this amazing shooter and prepare to have your ass handed to you! 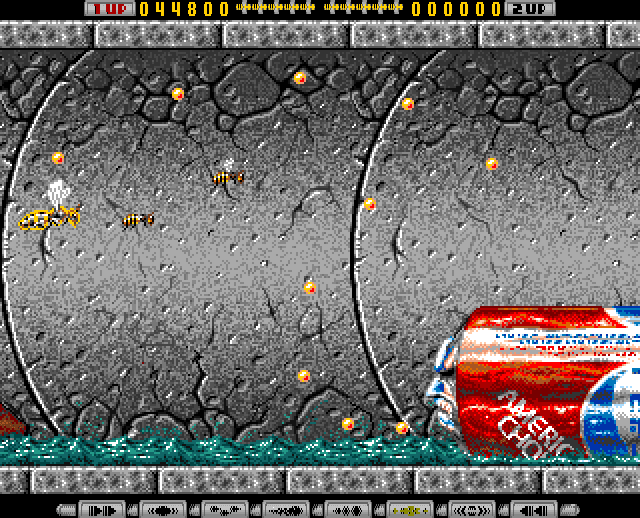 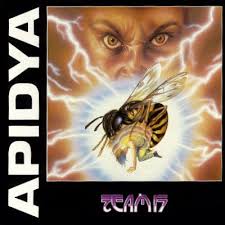